In academic life, when an invitation comes from your colleagues at a university setting, you mostly take it with collegiality and appreciation. When an invitation comes from an independent civil society organization, you first question the political stance and aim of that organization, do the checks and balances with your time and interest and proceed with your decision. When an invitation comes from your students, you take it with pleasure. This time, the invitation came from exile academics to the students, in resistance and in solidarity with the faculty for academic freedom, autonomy and freedom of expression…and it became a wide call to rights defenders across borders in no time! The General Students Committee of Gießen University (AStA JLU-Gießen) kindly provided the platform for discussion, students in Uni-College London and Socialist Student Collective in Cologne (SDS Cologne) agreed to join in, followed by a Bogazici-Uni alumni member and the Unchained Academy (Kelepcesiz Akademi) of Bogazici University. Academics for Peace-Germany called the gathering: “Whither Universitas: Solidarity Debate among students across borders” and scheduled it for 2 April, 2021. It was time, then, to start circulating the call with this poster…

The issue at hand was a tough, but an exciting one:  Recent presidential appointment of the trustee rector (kayyum rector) at the Bogazici University, police on/around campus, bans on freedom of expression, violations of the right to artistic freedoms, and attacks against LGBTi+ communities…On a more expansive scope, the ongoing assaults on freedom in Turkey as well as the recent student movements in other parts of the world.

The call on Academics for Peace-Germany website clarifies all doubt: Students from diverse walks of life across borders would like to welcome you to a solidarity debate during which we will ask hard questions on freedoms at large and discuss how we can create transnational solidarity that takes us to the next imagined level. Let’s join forces to break through the top-down intervention of hegemonic powers, and move on to protect universal values, human dignity, and critical knowledge!

We sought an interactive format, one that had not already been exhausted by zoomified gatherings. We came up with the “fishbowl technique” during which each discussant contributes a few minutes to each concept/keyword drawn from the magical bowl. Not all discussants would talk about each concept; participants could step up as they wish. They created a summary schedule with polls in between and a group discussion for solidarity in the end. This was a plan, but a risky one since we had to turn a completely F2F pattern into an online debate and it had to be welcoming, warm and interactive☺

Our crowd anxiety was replaced with a well-dosed stage thrill that provides fuel for a clear, talking mind as soon as the participants started contributing their honest take in the chat pane. The concepts drawn by the moderator from the fishbowl were mainly controversial paradigms that required extensive public discussion. Here is a brief account of how the debate rolled out.

Police on/around campus with its relation to LGBTI+ rights

The first draw was on state policing and violence. One of the discussants, as an alumni familiar with the chronology of police intervention to Bogazici University provided us with a short history, from Teknopark opening to the present. Another discussant from Unchained Academy talked about the detainment of 76 students in Turkey for carrying an LGBTI+ flag, the police violence during that and the criminalization of flags in the public sphere. The participants also commented on how the ground for closing the campus to non-Bogazici community was constructed by the state authorities at the beginning of the protests: “Bogazici students are not doing anything wrong; it is those coming from outside that are creating the menace!” This narrative was also used for othering the LGBTI+ students and creating polarization among the protestors as well as the community at large in support of the dissent movement. The assault on the exhibition organized by the fine arts club, also used as evidence for closing the LGBTI+ club showed how far the smear campaign and hegemonic, willful disinformation can go.

What do Legal/Right/Legitimate refer to? What are the perceived differences and the variation in practice?

This question had different appeal for discussants in and outside Turkey. While those in Turkey had the concrete example of presidential appointment of the rector as a legal case with no legitimacy, discussants outside Turkey had cases that were controversial in terms of being right and/or just. This referred to the class differences faced by diaspora students in terms of social and financial support they could receive. In the case of the UK, the huge difference between UK nationals and other students in tuition fees is, on its own, an issue with legal grounding, but its legitimacy or its place on the pin-board of justice are definitely very contestable. The false legitimation scenarios created by authoritarian governments or one-man regimes as in Turkey were raised by participants in the chat.

Academic freedom as a political/human right

For this concept, we had a poll. We asked the participants to fill it in before proceeding with the discussion.

Who should decide on/for academic freedom?

Here is the result we got: 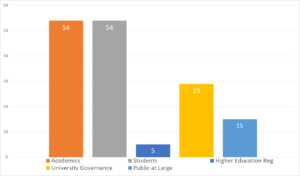 Participants had the chance to select multiple choices. The result was not very surprising; the participants conferred that decision makers should mainly be students, academics and university constituents (we were flagged by a few participants that “university structures” would better be reworded as “university constituents”). The discussants also added the issue of possible abuse from political right here. The recent cases in Europe point to the controversy between freedom of political expression and academic freedom on campus. Platforming of extremist (ultra-nationalist) political actors by academics and/or student clubs blur the lines while welcoming partisan, anti-humanitarian speech. Students, then, are the weakest link since they need to pass courses and graduate. Thus, self-censorship and naturally developed cancel culture are both surfaced.

Neoliberalization of academia and resources:

This part of the debate referred to universities running as companies, their dependency on third-party funding, the concept of private or foundation universities in Turkey, Germany, UK and elsewhere. The impact of that corporatization on subjects to be researched, taught and the declining critical knowledge, the market-based curriculum development were all mentioned. This was defined as a common problem faced all over the world with severe consequences for indecent labor conditions in academia as well as other sectors. The recent appointment of the trustee rector to Bogazici University has also played along these lines as the rector made false promises about how the university would become a globally recognized top-ranking institution, the minute he entered the campus.

Our second poll came towards the end of the event. We were wondering what the participants would make of the concept in relation to sustenance of academic freedom.

How important is institutional autonomy for academic freedom?

The result of the poll was: 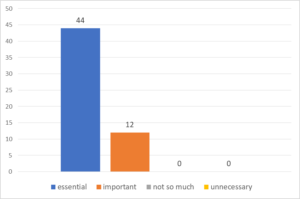 With 44 people deeming it essential and 12 people deeming it as important, there was a definite consensus on the necessity of institutional autonomy for academic freedom. However, the fact that the institution, itself, could abuse its right to autonomy against its own constituents including faculty members, staff and students is a whole other issue to discuss in upcoming debates, we thought. We have seen drastic consequences of such an abuse with the Academics for Peace case, as signatories of a peace petition were filed for dismissal by the initial agency of the trustee boards and rectors in a number of universities in Turkey. The discussants also stated that even though the student committees are given autonomy through the institution, they are never fully allowed to decide on their own. What looks like autonomy here is just enough to keep students quiet, but never provides actual freedom. The importance of elections as an emancipatory exercise was stressed here with the recent parachuting of the rector by the president in Turkey as the worst case possible. There was a consensus on the fact that the emancipation of the individual and the emancipation of society should come before the institutional identity and autonomy.

Points of transnational solidarity with Boğaziçi resistance and beyond

While the resistance expands with the support of unions, other universities in Turkey as well as transnational solidarity, there is a recurring question that chimes in our minds: How can we join forces to amplify our voices? Participants joining from Turkey, Germany, Lebanon, India, UK, Italy, US, UK, the Netherlands, Switzerland, Greece and Sweden promised each other to keep in contact, brainstorm new ideas and collaborate no matter what. Video messages for solidarity was one idea for circulation in social media and connecting with other dissent and solidarity movements in Greece, France, the UK, India, Poland and possibly Latin America came as a responsibility. Let`s end with a full-hearted note appearing in the chat pane during the event: The co-production of knowledge for the needs of the society and building active solidarity with oppressed peoples’ struggles are an integral part of academic activity.

For artistic work during the resistance on campus:

For our friends outside Turkey, the chronology of events at Bogazici: https://sivilalanarastirmalari.org.tr/kronoloji/ (just log on to the page using google chrome and get an automated translation to english)

For recorded and live events in a similar thread:

https://fb.me/e/2aextCC7x  (Art Under Trial, Resistance in Academia and Transnational Solidarities)

This is a cross-post from the original location on the AfP-Germany website: